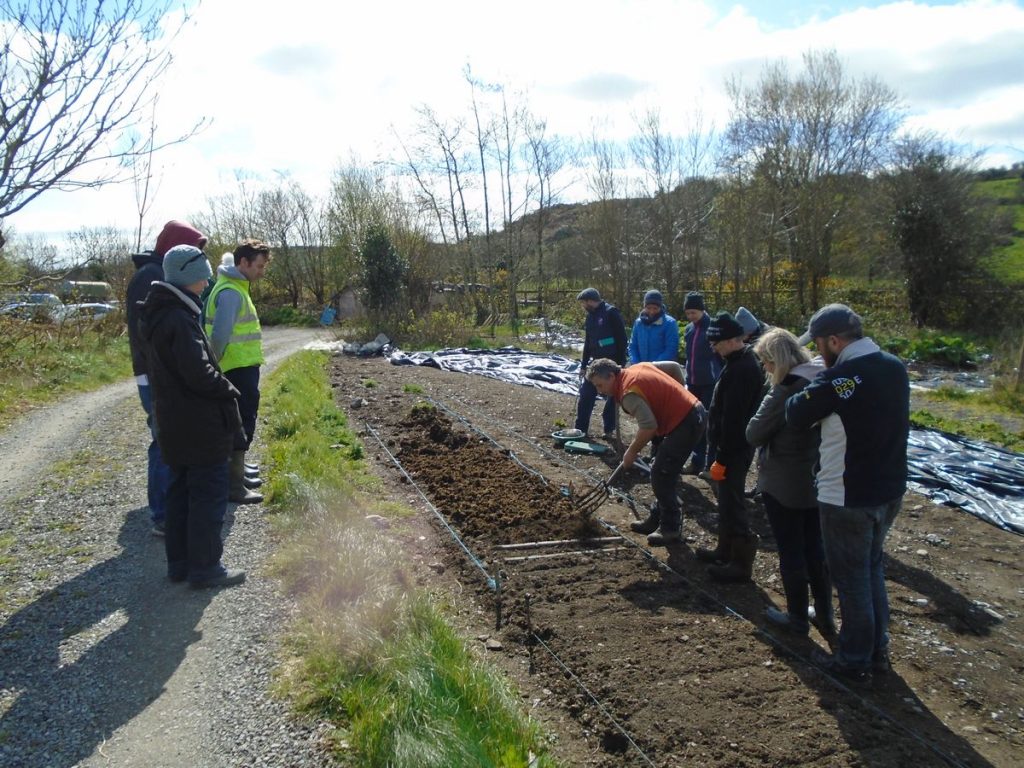 In the winter of 2005/6, a south-west facing sheltered field was chosen as the site to start developing our garden. This field was in the process of re-wilding as there were no animals grazing and no grass had been cut for many years. Fields are kept in the condition of producing grass by being fertilized, grazed by ruminants or cut as hay or silage. If this form of husbandry stops, the variety of species begins to increase. Brambles and briar’s are common at first. These help to condition the soil for the arrival of the first tree and shrub species. These are usually whatever is abundant nearby or growing on the hedges and ditches. In our case there would have been plenty of white thorn and blackthorn, willow, hazel and birch amongst others. The hedgerows essentially move out into the field, beginning a re-colonisation process that if left alone will eventually evolve into a stable forest ecosystem much as it was before these fields, stonewalls and hedgerows were created. The soil returns to a virgin state as there are no longer demands on it to provide fodder. Nutrients get ‘fixed’ from the atmosphere and the soil condition improves due to more root activity. This is an advantage from the viewpoint of turning the space into a series of raised beds and poly tunnels with the intention of growing vegetables and fruit. Of the one acre field that was to eventually become a working garden, about half had become very overgrown. There was a ring of grass in the middle of the field and the rest was densely overgrown.

We began the process of clearing the space by cutting the foliage and digging out the roots. This was achieved gradually using hand tools. Large sheets of cardboard which came from a bicycle shop were placed on top of the grass and cut foliage. On the card board we put plenty of well rotted farm yard manure. This was covered with a generous layer of straw. The cardboard blocks the light and stops the photosynthesis process, causing the organic matter on the surface to die off, returning the nutrients to soil. Cardboard being made from tree pulp is carbon, trees are one of natures ways of storing carbon. This quickly breaks down and returns to the soil. Earthworms get to work turning the cardboard and manure into topsoil, mixing with the topsoil that is already there. This field already has a generous amount of topsoil due to many years of leaf fall and root activity. This mulching process was done over the winter months.

In the spring potatoes were planting as the first (pioneer) crop by making a hole through the layers with a dibber (a pointed stick). Over the course of the spring and summer, as the layers break down the potatoes grow helping to further break down the soil. By the time the potatoes are harvested from the ground, the layers have broken down. The cardboard has been incorporated along with the manure into topsoil. Once cleared, raise beds were marked out about one meter wide with a narrow path in between. It is important not to walk on the soil where possible as this can cause compaction and may limit the soils ability to drain. This process was repeated over the course of the next few years until the field was transformed into a productive garden.

As the seasons rolled on and the garden was developed, polytunnels were added and fruit trees and shrubs were established. One of the things that surprised us was the amount of food that can be grown on a small piece of ground. Raised beds, intensively cultivated have the capacity to keep putting out crop after crop. The way to keep productivity high is to rotate the vegetable families and to keep returning nutrients to the soil. We do this by adding organic matter in the form of compost, seaweed and horse manure from our own horses. This will keep the fertility high by providing the nutrients that plants need. Healthy soil means healthy crops. Healthy crops means healthy people. Growing your own is a win win situation, and once you get going there are many benefits. If you are an individual, a group or organisation who would like to grow your own but don’t quite know where to start or need a bit of advice, then a gardening course at the Hollies could be just the thing for you. A gardening course voucher could make great present for a loved one, or for anyone looking for a bit of inspiration to get going on their journey to being a successful gardener.